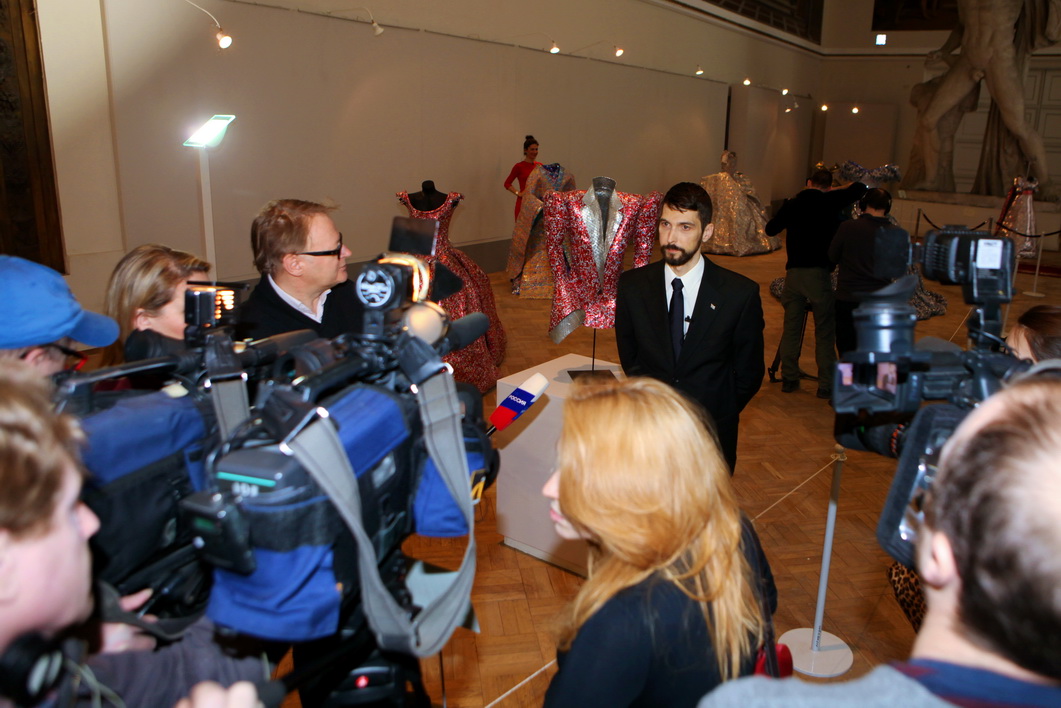 Exhibition of Nikos Floros’ Unique Aluminum Sculptural Costumes Inspired by Maria Callas, Grace Kelly and Catherine the Great, Enthralls at the Russian Arts Museum.
The artist presented his unique sculptural costumes created using recycled aluminum and beverage cans.
International dignitaries and celebrities joined an overflow crowd at the opening reception on March 6th of the major retrospective exhibition of the internationally recognized sculptor of Hellenic descent, Nikos Floros, at the Russian Academy of Fine Arts Museum in St. Petersburg, Russia. Following a very successful run from September 2, 2013 to March 2, 2014 at the Tsaritsyno State Museum and Reserve in Moscow where over 4 million people from around the world visited the exhibition, it continued on to St. Petersburg where the director of the museum reported that the “record crowds have come to see the exhibit in the first few days after its opening and the comments have been extremely favorable. Many visitors were very impressed by the originality, creativity, and great beauty of the artwork.” On display in the Raphael Hall, the exhibition will be open to the public until April 6, 2014.

The artist presented his unique sculptural costumes created using recycled aluminum and beverage cans. This original method was created and patented by Nikos Floros in 2003.

The surrealistic pop-art creations by Mr. Floros have been exhibited around the world including many major museums. These include, the Archeological Museum in Thessaloki, Greece; Benaki Museum and Museum of Meizonos Hellenism in Athens, Greece; as well as the National Museum Palace of the Grand Master, Rhodes, Greece. In addition at the National Museum of Women in the Arts in Washington, DC; the Hofburg Palace in Vienna, Austria; the Whitney Museum of American Art; the Metropolitan Club in New York City, Mr. Floros was the only artist invited to exhibit his work dedicated to Princesss Grace in Monte Carlo, Monaco during the Grace: Symbol of Change international tribute held under the auspices of HSH Prince Albert of Monaco;
among many others. In 2013, Nikos Floros was invited for a solo exhibition to commemorate the 250th anniversary of the Theatro Communale in Bologna, Italy, one of the oldest and most distinguished operas in the world. This exhibition was sponsored by Tonino Lamborghini Nikos Floros’ sculptural costumes are in museums and private collections around the world.

Throughout history, clothes have projected status, and served the wealthy and powerful as symbols of their strength and influence over others. Clothes play a vital role in how others perceive people and how those wearing them behave. Today we call this “branding” or marketing. The clothes worn by famous and influential people such as Queen Elizabeth I, Maria Callas, Grace Kelly, Catherine the Great and others have played a vital role in projecting their influence and power. In our modern era, one of the most recognizable and prevalent brands is Coca-Cola. Encased in a common aluminum beverage can, it is known throughout the world and a powerful symbol of power and influence. Aluminum, a material which characterizes our modern era, is itself a very modern creation and is most available and prevalent in our everyday beverage cans. These are powerful symbols of our modern era.

Through his artwork, Nikos Floros has combined all of these elements, to create an alternate perception. Utilizing this very modern medium, aluminum, along with a very modern and powerful brand, Coca-Cola, he has weaved a new form of “fabric” creating unique and original sculptural costumes evoking the power and influence of these historical figures and personalities. The artist, creating these sculptural costumes, heretofore symbols of power, utilizing a material which is a product of modern society, wishes to realize and make evident the great power and strength that the autocracy of modern day marketing and advertising exercise over common man and how the raison d’etre of our society has become “I consume, therefore I am.”

Dedicated to International Women’s Day, the exhibition celebrates the lives and contributions of exceptional women. Nikos Floros utilizes materials from our everyday lives which he transforms into magnificent original works of art. A major inspiration for him has been the lives of extraordinary women such as Queen Elizabeth I, Katherine the Great, Maria Callas and Grace Kelly. These women have been transformative figures. Nikos Floros has been inspired by them and created moving tributes to their art, their lives, their spirits and their legacies. The centerpiece and highlight of this exhibit is his new masterpiece inspired by Catherine the Great of Russia and presented for the first time on March 6th in St. Petersburg. This portrait, utilizing the aluminum material for which Mr. Floros is well known, is a natural progression and development of Mr. Floros’ work, utilizing a mosaic-like technique for the portrait while including sculpture-like components.

Aristotelis Karantis, curator of the exhibit, stated that “for the first time a portrait of Catherine the Great has been created using aluminum and upon completion of the exhibition, this piece will be contributed for the permanent collection of the Hermitage Museum in St. Petersburg”.

Nikos Floros’ work has received worldwide recognition and has been covered by major news services such as Reuters, BBC, Sky News, ABC News, New York Times, Vogue, W, Associated Press, Fashion TV and many other news and television channels throughout the world.

Nikos Floros was recognized for his talent and originality early in his career and was awarded with the Grand Prize for the “Red Queen Elizabeth” costume, presented by the curator Harold Koda of the Metropolitan Museum of Art Costume Institute, the Grand Prize for the “Silver Elizabeth I” costume, from the French Heritage Society at the “Young Friends Heritage Society”, Golden Medal of Arts and Sciences from the Albert Schweitzer Foundation in Vienna, as well as The Global Thinkers Award in 2013 for Excellence in Innovation. Nikos’ Floros artwork was chosen by the Brazilian educational system for inclusion in their instructional textbooks.

Curator of the exhibition is Aristotelis Karantis, exclusive photos provided by Ilias Diamantakos, and the exhibition is organized by Julia Sysalova and public relations by Dora Ziongas of USA, This and all of Mr. Nikos Floros exhibitions are dedicated to his late friend and collaborator, the Broadway actor/singer, George Costacos. This exhibition was introduced by the City of Tripolis, Arcadia, Greece as part of their candidacy for European Cultural Capital 2021 campaign “Tripolis –Ambassador of Contemporary Greek Culture”. Nikos Floros draws great strength and inspiration from his home town in Arcadia, Greece a harmonious and peaceful place where humans live in balance with nature.

Very moved by the enthusiastic and warm reception his work has received in Russia, Mr. Floros has sent a personal note of thanks to Russian President Vladimir Putin expressing his feelings of gratitude and the great honor bestowed upon him by these two very important and distinguished national museums of Russia. Mr. Floros believes that art is one of the strongest bridges between peoples around the world, bringing together nations with the goal of uniting cultures and promoting understanding and cooperation. His future projects include a series of works inspired by the last imperial Russian family, the Romanov, commissioned to commemorate the year of Hellenic-Russian Friendship planned for 2016. He is also working to complete works
In aluminum inspired by the Parthenon Marbles, presently in the British Museum.

Nikos Floros was born in Hellas. He grew up in Athens and has lived and worked in several major cities around the world. He studied at the School of Fine Arts (Ecole des Beaux Arts) in Paris as well as classical piano and classical theater in Greece.